Check us out on WPTV news in West Palm Beach, FL!

The American Cancer Society says skin cancer is the most common cancer in the U.S., diagnosed more often than all other cancers combined.

Parallel with the increases in melanoma have been increases in time spent outdoors and usage of tanning beds, especially among adolescent women.

"While more research is needed to confirm the link between melanoma and UVR exposure, this study shows that melanoma is becoming an ever greater danger for young women, and strongly suggests concrete, effective ways to minimize the danger — namely, protect yourself against the sun, and stay out of tanning booths," said Perry Robins, MD, President of The Skin Cancer Foundation.

Scott Tate spent his entire life outdoors. In childhood, he ran around in the South Florida sunshine barefoot and without a shirt. In adulthood, he worked as a lineman, outside every day of the year from morning until night.

“After a while you get a nice tan going, everybody thought you were healthy,” he explained.

Tate says he will never view sun the same way again. During the last ten years, he has been diagnosed with multiple kinds of melanoma at different times.

“When the chemo nurse picks up your prescription and kind of gives you a shocked look, you know you have a pretty heavy therapy coming,” he said.

A tiny spot that wouldn’t heal led to multiple surgeries and dozens of radiation and chemotherapy treatments.

This summer, a trend of “sunburn art” has dermatologists and cancer prevention groups reeling. Social media is awash with photos of patterned skin, with people targeting specific patches of skin using sunscreen in some places and not in others.

The Skin Cancer Foundation says just 5 sunburns in childhood can increase a person’s risk for melanoma by 80 percent.

There are new devices and methods emerging constantly to help people prevent too much sun exposure. A wearable device reminds users to reapply sunscreen and special detergent increases clothing’s ability to ward off the rays of the sun.

Tommy Green in Boynton Beach, Florida has developed “CoolHeads,” a terry cloth head wrap that shades the ears and back of the neck. He says he had the idea for cooling people down while playing basketball. After the product started to sell, Green was told by customers that it was helpful for skin cancer prevention as well.

“It’s instant shade, it’s a way to instantly block yourself from the sun,” he said.

Tate says, his whole life is about finding shade. He doesn’t leave home without a hat and he wears long sleeves for very brief visits to the beach. He points out, even in shade, one can receive the damaging rays of sun through reflection off sand and water.

“Be proactive, get checked up, don’t take anything for granted,” he said.

The American Cancer Society has photos to help guide you to identifying potential skin problems.

The Skin Cancer Foundation has also released tips for sun safety in a daily routine: 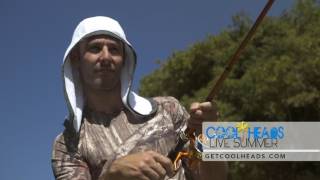 Our National As Seen On TV Commercial with Kevin Harrington Is Live!!

Check out this awesome article from Philly.com

Sun Protection information from the Center for Disease Control and Prevention, Knowing is half the

Now You Can Blog from Everywhere!

How To Prevent Harmful Sun Rays during Summertime

Learn The Best Ways To Stay Cool This Summer